The Kansas City Chiefs may have lost to the Cincinnati Bengals – we will get to this shortly – on Sunday evening, but most Chiefs’ fans will see this one live long in the memory for one very special Patrick Mahomes’ touchdown run.

MaGoat threw out his very finest GOAT impression on the play, which led to a touchdown that put the Chiefs ahead. Mahomes dropped back to pass on the play – a fourth-and-goal play from the three-yard line. He quickly determined his receivers weren’t open and put the play on his back as he scrambled for the goal line.

Mahomes was going to come up short as defenders converged on his position, but by leaping with his best ‘Jumpman’ technique – the ball in one hand and stretched to the plane of the goal line – he managed to give his Chiefs the go-ahead score. It will go down as one of his all-time great plays, even if the result went in the wrong direction for fans of the Chiefs. 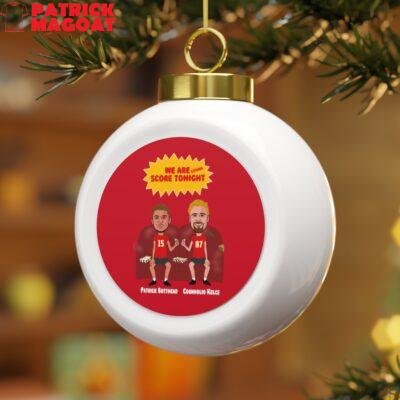 It is pretty crazy that a tight end having four catches for 59 yards in a game would be seen as a problem. That happened on Sunday, though, as the Bengals did an outstanding job of not letting Travis Kelce beat them.

Teams know that the offense Mahomes and the Chiefs run goes through Kelce above all else. His ability to draw and beat double teams allows the other receivers and (especially) the backs coming out of the backfield to get open.

The reason that Kelce is so important is his YAC number. He can take a tight-end screen and turn it into a 15 or 20-yard gain. He also gets better in the red zone and late in games when the Chiefs need a score. The Bengals knew they had to play Kelce physically, and they managed to do so. Any Reid has said that the Chiefs should have used more designed plays to get Kelce the ball in space, so it will be interesting to see if these two meet in the playoffs the way that Reid schemes to get his most reliably offensive weapon open more consistently.

Another area that the Chiefs will need to improve going forward is their ability to sack a rival quarterback. Mahomes is the MaGoat, but the defense must also play its part. The Chiefs had 11 pressures of Joe Burrow, but they could only turn that pressure into a single sack. Burrow is a sneaky good athlete, and he has that innate ability to feel pressure and slide in the pocket to avoid being hit, but the defense must be better at reading that and closing with the correct angles.

All in all, this was a frustrating one for Mahomes and the Chiefs. Two of their three losses this year are now to rival AFC contender – the Bills’ loss hurts for home-field advantage reasons – and Kansas City will be hoping Cincinnati can do them a favor later in the year when they host Buffalo. Mahomes is now 0-3 against the Bengals. He might have to pick up his first win over them in January if the Chiefs are to make the Super Bowl at the end of the 2022 season.

Patrick Mahomes Is A One-Legged Magician

If Patrick Mahomes never plays another down in the NFL, he would go down as a top 10 - and maybe even top 5 - player at the position al...

END_OF_DOCUMENT_TOKEN_TO_BE_REPLACED

Patrick Mahomes Next Opponent Is Time

Patrick Mahomes has defeated everything the NFL has thrown at him. The Kansas City Chiefs' record-setting quarterback has a Super Bowl ...

END_OF_DOCUMENT_TOKEN_TO_BE_REPLACED

Patrick Mahomes Ready For The Jaguars

The Kansas City Chiefs and Patrick Mahomes have seen the other six AFC playoff teams battle through one game already, and they are read...

END_OF_DOCUMENT_TOKEN_TO_BE_REPLACED

Patrick Mahomes And The Chiefs Hot At The Right Time

If you wanted to argue that Patrick Mahomes and the 14-3 Kansas City Chiefs have been hot all season, I would certainly listen. The Chi...

END_OF_DOCUMENT_TOKEN_TO_BE_REPLACED

Even when Patrick Mahomes plays badly, he does something you have never seen before. Mahomes played his worst game of the year on Sunda...

END_OF_DOCUMENT_TOKEN_TO_BE_REPLACED

The Kansas City Chiefs Are The Best Team In The NFL

END_OF_DOCUMENT_TOKEN_TO_BE_REPLACED

It is wild how underappreciated Patrick Mahomes is at this point in his career. Mahomes plays quarterback at a different level - it is ...